This was a big week. I’m not even sure this counts as background radiation at this point. It’s an outright attack on transgender people. Whether from bigotry, or shallow political showmanship, it’s still a deep cut at allowing transgender people to partake in normal public life.

As you have all heard by now, Trump Tweeted on barring transgender people from serving in any capacity in the military.

I work for an agency within the Department of Defense, so this hits close to home. I am not active duty, and have never served in the military. However, my agency follows guidelines for the entire DoD.

It is unfathomably openly bigoted to even attempt something like this. I’m not surprised the Trump administration is a festering bag of syphilitic dicks, but I am surprised at the sheer audacity with which they put their bigotry on display.

The first article I read on this was from LGBTQNation titled: Trump bans transgender people from serving in the military.

Then from there my RSS and Google Alerts blew up in spectacular fashion.

At this point we all know what Trump, and his hate filled shoulder devil Mike Pence, tried to do. Instead of focussing on a bare number of half illiterate tweets, I’d like to focus on the things that came out of this that gave me hope.

Within 24 hours of receiving this news, I had coworkers sending me emails outraged on my behalf. My friend Steve sent me an article from the Military Times titled: Transgender airman: ‘I would like to see them try to kick me out of my military’

I also started to see the responses on the internet pour in.

Caitlyn Jenner came out swinging at Trump in Caitlyn Jenner is upset with Trump over military ban. Love her or hate her, this is significant because she is conservative politically, and has a platform. She’s been used by other conservative politicians as the “trans friend” argument. It’s hard to do that when she’s not being so friendly. Plus, despite what you say about her, she does publicity better than Trumps administration could hope to. That’s her families livelihood.

In fact, here is an entire list that LGBTQNation put together of conservative Republicans that opposed this fuckery These Republicans are giving Trump the finger & supporting transgender rights.

I am so liberal I bleed socialism, but to see people so far on the other side of the political fence opposing this persecution of transgender people in the military is great. By all accounts we have somewhere around 15,000 transgender troops out there. To have conservative people, who might not always view us as normal human beings, come out against this is very hopeful for the future of transgender rights.

But then there is everyone else that stepped up:

Marine General Joseph Dunford, the nations senior military officer and chair of the Joint Chief’s of Staff said they will not act on tweets. They will not act until they receive legit legal policy changes from the white house. He also noted they will continue to treat all troops with respect, similar to the memo my friend Christy sent me. This is the most fuck you, I think the DoD can do, honestly. They have to respond to direct policy change, but he’s pointing out it’s a shit policy change if it happens. Top U.S. general says Pentagon will not change policy on transgender troops until White House acts

The Mayor of Austin is offering police jobs to any transgender troops that were kicked out of the military: Mayor Invites Trans People Banned From Military To Join Police Department

There are stacks of websites listing the cost breakdown on what it would cost for transgender health care. This is just one such article from Lifehacker The Military Spends More on Viagra Than on Transgender Soldiers’ Medical Expenses

This is not a small issue. To have our President make this proclamation, via tweet no less, is a stunning nod to all the bigots out there that already hate transgender people. It’s a dangerous time to be out and trans, especially if you are transfeminine and not white. The violence scales towards transgender women, and is higher against people of color.

However, this has also brought us many unlikely allies that have never thought about transgender people before. In my personal life, I have had folks step forward to tell me they are shocked at the bigotry on display, and didn’t know we faced that. If nothing else, we are gaining allies because our opposition has come out looking no better than a playground bully.

Lastly, I’d like to thank Mark Agee for this meme: 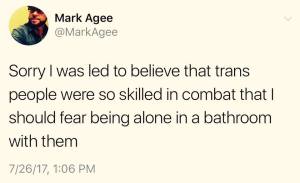