Last week Jello and I were out looking at new apartments to move into. We scoured all of the surrounding Seattle areas and ended up a little out of the way at a gas station. The gas station had one of those “Bikini Barista” spots in the parking lot that our area is “famous” for. 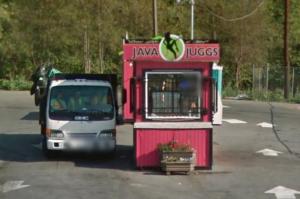 JJ is considered an “upscale” version.

For those who don’t know, bikini barista spots usually have young women dressed in g strings and bikini tops. The coffee is usually more expensive and not as good (it attracts “customers” that are more interested in perving on the girls than coffee). Several of the stands in the past have been nailed for various forms of prostitution, and after those raids the remaining stands seem more legit, but still keep what they are doing, attracting assholes.

Personally I had only ever been to one bikini barista before this, and it was by accident. The stand had been  normal espresso stand two months before. We were going up to visit my mom and so I needed some coffee. I pulled in and found myself in a bikini barista parking lot.

I felt awkward and bad for the ladies working. They weren’t very happy to be there and the customers in front of me were sleazy to them. I ordered coffee anyways without being able to look at anything but their faces, just because I didn’t want to be one of the other sleazes that walk up to the stand, stare and walk away. So I got a poorer tasting espresso, tipped her well and walked on. Damn she was way to young for me to even be comfortable looking at her.

So last week we pulled in and parked in the gas station portion of the parking lot. We noticed a guy standing in front of the barista building. Jello decided he wanted a hot chocolate from the barista stand, which is unusual. He usually will do gas station or go to a Starbuck’s. A bikini espresso stand seemed unusual for a man who likes other men so much. I think now he must have noticed the customer at the bikini stand was being a little weird at the window.

We wandered over to the stand and the guy hurried off. We stepped up and Jello engaged the young lady in conversation. She was only wearing a tiny bikini top and what looked like a thong. She looked harried but smiled. She couldn’t have been older than 22-23, although even with being harried she was very courteous.

We talked for awhile and joked a bit. Jello ordered his chocolate and she asked me what I wanted. I panicked a little, I wasn’t interested in anything but the gas station coffee so I said I didn’t want anything. This caused a slight uncomfortable pause from her as she just stared at me. Jello was quicker than I at the response and mentioned I was there as support for him.

It was at this point that she blanched, she seemed worried and at that moment we both realized she thought I had just wanted to take a look at the girl without paying. Jello burst out laughing and quickly explained to the barista that I was his “married” support and that we were two gay guys wanting coffee.

The young lady immediately relaxed and gave a real smile. She joked about them opening a “banana hammock” stand down the road. She then went into detail about the guy who was there before us. He didn’t even order any drinks, he was just asking her questions about herself and touching himself with one hand in his pants pockets. When Jello explained he came over because the guy was seeming weird, the barista thanked us. She told us she didn’t mind guys ogling her, it was part of her job, but not buying anything, leering and touching himself while asking questions wasn’t what she signed on for.

I turned around to look at the guy but he was already gone. I was so damn pissed. I hate watching guys hit on women in bars, restaurants, etc. I don’t even understand why you would do that. If one of my friends does that, I will shut them down and a lot of times never go out with that individual again. No matter what though, when someone near me does that, it usually makes the woman not trust me (and no I don’t blame her).

The thing that struck me as strange though, this was the first time I recall a woman who was being harassed and talking to me about it, showed no worries about me. The fact she considered me gay and therefore safe was unusual for me. I think it has only happened a couple times before (and I usually didn’t notice it until later).

We chatted a little more, made sure the guy wasn’t returning and got my coffee from the gas station. On our way out, we noted another sleazy looking guy in an overblown Ford pickup. She once again had that frozen/courteous face and looked uncomfortable. There are times that cisgendered heterosexual males annoy me, that was definitely one of them.