Over the last couple years, I have learned what its like to be walking around publicly with my husband and have people go from seeing us as a heterosexual couple to a gay couple. The change was slow to happen, but now that I look back I see a lot of difference.

I haven’t had many problems with people reactions to us in person, the most we get is the occasional scowl, although maybe that is because I am 6’4” and almost 300lbs. Because of this I generally don’t fear people’s reactions around Jello.

Last Wednesday was a surprise, it had started a bit rough for me. I still haven’t dealt with my father’s passing (that will probably be in a  few months if its like other things with me) so I was grumpy. However, no matter how I am feeling, the longer I am around Jello the less grumpy I get.

We were standing in line and Jello and I were chatting and I started joking around. I joke around a lot and I am pretty physical with my friends, and even more so with Jello. I am always pushing, shoving lightly, poking, etc. In fact if we go to lunch with someone, Jello almost always makes me sit with them, both because he wants to eat lunch with the least poking and prodding, and he thinks it’s funny when other shave to deal with me. As a side note, the more physical I am with a person, the more I generally like them. 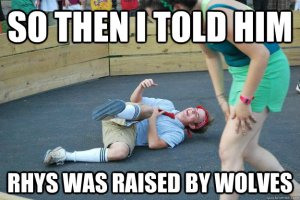 I was basically raised by wolves

Like I have talked about before, sometimes Jello gets a little worried because now that we are viewed as a same sex couple, people don’t always react as nice. When he was younger and people interpreted him as being a lesbian when he was dating women (pre-transition) they would chase after him and threaten him. So when we are in line at a store, or in close proximity to people he doesn’t know, he isn’t always the keenest on physical contact.

Behind us was a Sikh gentleman, minding his own business. I suspect he hadn’t even really noticed us. At this time I was joking with Jello and patted his head. I don’t remember exactly what I was saying, but it was something smart ass. Jello reacted half jokingly (he is an incredibly loud and boisterous personality). Jello did a weird pushing my hand away movement and joked around about leaving him alone. He then froze because I think he noticed the gentleman behind us.

I felt bad for a millisecond, worried I had just caused a scene that would end in frustration with people. While I am also loud and boisterous, I don’t like making Jello feel uncomfortable too much (nor those poor innocent bystanders around us). That is when the Sikh gentleman broke out into a huge smile. It wasn’t just a polite smile, but its the kind of thing you see on someone who notices a couple joking around, or kids playing and thinks it is the greatest thing in the world.

The smile conveyed a happiness at what he saw, and an acceptance. He had one of those smiles that lit up the area around him, large white teeth and he was unafraid to show his humor. I realized instantly that he knew we were together, and he approved of our joking around. It is unlikely I will ever meet the gentleman again, but that humorous acceptance of Jello and myself changed my whole mood that day. He cheered me up on the inside, and I can’t put words out that would satisfy how appreciative I was of that simple reaction to me being with Jello and joking around.

I just thought I had to share with you folks. Sometimes the small interactions make all the difference.

This entry was posted in All Articles, Lucky's Articles (AG) and tagged events, jello, smiles. Bookmark the permalink.