Posted on September 23, 2014 by AccidentallyGay 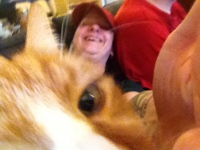 Just a funny picture of Jello and Marmalade.

This weekend on our way up to see my parents, Jello and I stopped at a Safeway grocery store. The trip is about 100 miles each direction so we wanted something to snack on and drink.

We got in the store and Jello decided to go use the restroom. I didn’t think anything about it and a couple of minutes later I realized I should probably use it too since we would be driving for almost two hours.

It was momentarily surreal, in a cool but unexpected way. Of course at this point I said something smartass to him in the stall. He hesitated a second, probably trying to figure out if someone was calling him out (it is a worry he has, that someone will yell at him for being in the wrong bathroom). After a moment he realized it was me and said something smart ass back (I don’t recall what).

I then went into the rest of the store and moved on. We laughed about it in the car. I just wanted to share the experience. It was a tiny experience, caused a little bit of disorientation when it happened but was funny.

This entry was posted in All Articles, Lucky's Articles (AG) and tagged events, ftm, transition. Bookmark the permalink.