Posted on May 3, 2017 by AccidentallyGay

Last week Wolsey and I had a very awkward encounter at the barber shop after work (yes I said an actual barber shop, ran by two very nice Asian ladies). We were both sitting there in the two chairs when a man about 40 came in.

This guy had a very blue collar type look, jeans, boots, etc. Obviously, he had just come in from some form of labor work himself. He sat down at the waiting chairs about 5 feet from us when he just looked at Wolsey and I. When he asked out of the blue if we knew each other.

I hesitated when I looked at him. I am a lot bigger then him, and not physically intimidated by him at all, but both Wolsey and I without breaking a sweat said something along the lines of “Yes, we know each other” and left it at that. I didn’t want to cause a ruckus for the ladies in the shop, and I didn’t want to get in a fight. He had the feeling of someone who was looking for one.

He looked down at my feet and then at Wolsey’s and joked something about we must be locals. This was because both of us were wearing sandals and it wasn’t even 60 degrees outside. I was watching him the whole time, while the barber was still cutting my hair. I felt the same way just before I got into fights when I was younger (not that I got into a lot of them, but it had that same icy feeling, everything was in focus).

He kept talking to us, and it was incredibly awkward. We were polite, and somehow it got onto what we did for a living. He did lower his intensity when he asked what we do for a living. When we both responded, we worked for the department of defense, auditing contractors and that seemed to catch him off guard. I don’t think he considered we might work in such a conservative environment.

He then asked if we had served active duty. I chuckled and said “not even close”. I almost said “they didn’t let my kind in when I was younger”. Of course, that would have been a provoking comment since at the time I considered it I wasn’t in a same sex marriage, but I do that when someone annoys me.

It turns out he worked in one of the shipbuilding areas. While he was talking, he kept looking at us weird, and it wasn’t until afterwards Wolsey pointed out that we kept finishing each other’s sentences without hesitating, and that one of my toenails was still pink from when I had them done a long time ago. I hadn’t realized I had a pink toenail left over since I am colorblind and they all look the same, so it made more sense why he was looking at us weird when he came in.  By the end he was polite about everything, just talking to us about random things in an awkward way. Then we must have intimidated him when we stood up.

Wolsey stood up and when the barber removed the bib thing they use you could see all of his tattoos. He is definitely a rough looking guy (Wolsey, not douchebag in the waiting chair). Wolsey had the same attitude he had when he was younger and a punk (real kind, from the 80s). He then almost stepped out of his seat away from us when I stood up. I don’t think he realized I was 6’4” and close to 300lbs. He immediately looked down and wished us a good day.

Wolsey and I joked that I was “the biggest faggot he ever saw”. It’s an inside joke when I went to the water slides with everyone about 15 years ago. Wolsey watched two guys talking about how I was obviously with another guy and gay (this time it was our friend Dylan, and no we weren’t “together” but the night before we had gotten drunk and put on toenail polish, and we were just hanging out at table) and they were approaching us to cause problems.

Wolsey who at the time was still presenting as a tiny girl was creeping up behind those guys getting ready to get involved if they attacked us. However, as the guys approached Dylan and I stood up and immediately the two homophobes stopped approaching us and said something about us being “the biggest faggots they ever saw”, so that is now part of the inside joke with our group of friends, long before it might be more true than they realized. 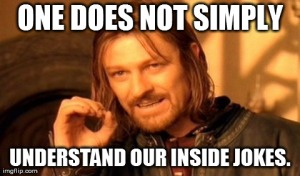 That was almost the exact same physical reaction that the douchebag in the barbershop had when he saw us both get up. We talked about it afterwards and agreed he was probing the two of us to see if we were together (how can anyone not see that). He didn’t come off as an ally or fellow LGBTQ person, he had more of that Trump voter look. So, in the end I didn’t feel bad making him feel awkward.

Something like this doesn’t happen to me a lot here in Seattle, but even here you get douchebags MAGAs and it becomes apparent things are not over on a local level even. The worst part is I am really annoyed at myself for hesitating and not just telling the douche that yes, I am married to that awesome guy beside me.

This entry was posted in All Articles, Lucky's Articles (AG) and tagged awkward, encounters, homophobia, jello. Bookmark the permalink.

1 Response to A Barbershop Encounter