Posted on March 6, 2017 by AccidentallyGay

This could be interesting.

This reminds me of all the times I have seen women say they won’t date a man with a beard, there was a bit of an understanding there when he came out and started growing his hair. I used to think that was pretty shallow reason… evidently I had become a hypocrite.

At first he thought it might be the look thing that bothered me, but I really don’t think it’s the look of a beard that worried me. The look can be pretty cool looking, and I by far would be the last person to judge another on their beard, since I sometimes grow one out, especially if I have ingrown hairs. That being said, I suspect a mountain man beard is not acceptable look wise no matter what, so maybe I am judgmental in that case. If there is a beard, it has to be well maintained.

I am fairly sure the feel of the beard is what made me squeamish. I have done the beard thing occasionally and I find my own beard too rough and annoying. I couldn’t imagine kissing a sandpaper like face (my beard can be like that before it grows out all the way). 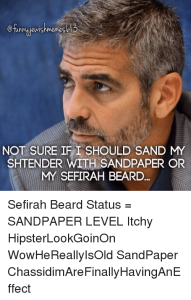 I have had girlfriends before Wolsey and I got together that disliked beards, and my father didn’t have anything more than a Fu-Manchu/biker stache on his face so I didn’t grow up around it as being normal facial hair. So, beards have always been a theory, not a reality.

I am sure it doesn’t help that I had a friend who insisted on the mountain man beard as a young man, with results that were as horrific as you can imagine. 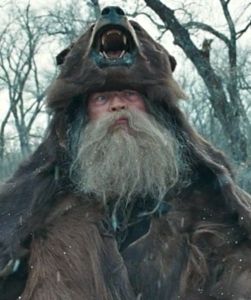 Not really joking, his beard was worse than this.

Now that we are 3.5 years into the transition and Wolsey can get a solid set of sideburns and a chin beard (the rest is starting to come in), I can say that it doesn’t bother me. Last night I was looking at it in depth, touching it, just examining it, probably to an awkward feeling Wolsey. I found it really doesn’t make a difference at all. It isn’t a turn off, it isn’t something that scares me, it isn’t something I have an issue with. I say go ahead my husband, wear your beard proudly.

I still can’t do a mountain man beard though, that is still a no-go.

This entry was posted in All Articles, Lucky's Articles (AG) and tagged beard, health, hygiene. Bookmark the permalink.

1 Response to The Beard