Posted on October 22, 2016 by AccidentallyGay

Earlier this month we were able to go to Geek Girl Con (http://geekgirlcon.com). Which by the way is probably the most fantastic convention I have been too. I haven’t been to such an open and friendly to LGBTQIA gathering ever.

We haven’t gone for a few years, once was due to sickness in the household, the remainder due mostly because of Wolsey’s transition. He didn’t feel comfortable going as he wasn’t at a place he wanted to walk around publicly. I was totally fine with that.

When we were in the parking garage (the same one we used last time we came here) I noticed Wolsey was standing by the window in the same area he did last time I got a picture. So I snapped a picture, and here you can see the difference between four years (2012 and 2016). 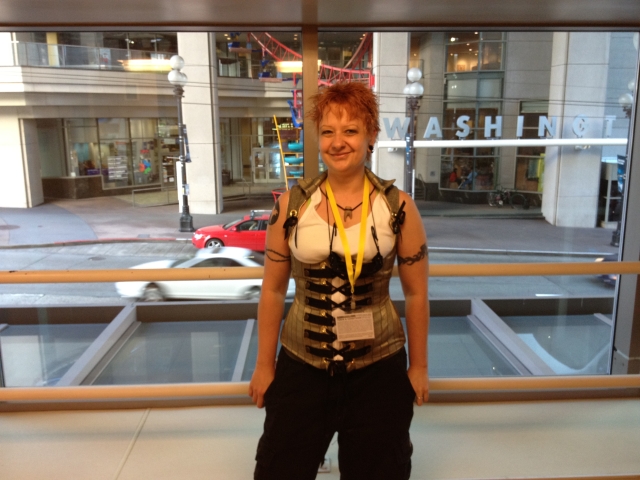 I had remembered that GGC was very friendly before, but it was now 4 times bigger than when we went to last time so I was a bit uncomfortable at first. However everyone was smiling and no one was upset. People were running back and forth laughing, joking and seeming incredibly friendly. They noticed Wolsey and I holding hands and would just smile.

Now that is something I hadn’t realized I had missed so much. This was the first public place since Wolsey’s transition that he held my hands for longer than 30 seconds. He wasn’t worried about being perceived in a same sex marriage and any blowback that might get us (he has moved beyond being clocked in almost all but the most extreme circumstances). We wandered around the merchant alley and he never stopped holding my hand. It was pretty fantastic.

I was a little anxious during the weekend. I couldn’t place why until I attended a panel on having “Imposter Syndrome”. It dawned on me that I was terrified I wouldn’t be accepted. That people might somehow find I was “accidentally gay” and therefore I don’t really belong. The panel gave some good advice and it helped me work on that issue (it is really prevalent in most of my life).

Other panels that I really enjoyed were

Nothing really big or mind blowing happened here, except it felt safe, and everyone was so friendly and inviting. I just thought I would share our first LGBTQIA friendly con since Wolsey’s transition.