A BRCC and Dog Whistle encounter.

Posted on August 13, 2017 by AccidentallyGay

Dog Whistle (term): a coded message communicated through words or phrases commonly understood by a particular group of people, but not by others. – Merriam Webster

Yesterday was a long day, one that I won’t go into here but was very physically and emotionally exhausting for both Wolsey and myself. On our way home from a single day 250 mile round-trip we stopped at McDonalds, and we decided to sit inside to eat. 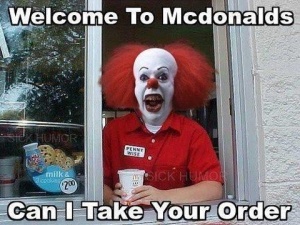 We had just heard about the horrific alt-right/Nazi/Trump Douchebag attacks in Virginia and were not in a great mood because of it. The area we were in was remarkably pro-Trump earlier in the day, with a god awful sign screaming about defunding Planned Parenthood, so I think I was extra vigilant (or maybe just so pissed about the day I was looking for a problem).

I will be the first to admit I was more aggressive then I probably should be, but the family stuff along with the Alt-Right douchebaggery had me rattled. However, I didn’t want to clean up what I say here because I wanted to share my emotion, and admit I probably could have handled this a little better.

We got in, got our burgers and were talking. I was incredibly thankful to have Wolsey with me, and we just started feeling a little better when in walked two young men, mid-twenties probably who came walking into the seating area and stumbled around for a minute or two. I noticed their shirts had the letters BRCC on them, some sort of coffee symbol and a crosshair (although I wasn’t sure at the time if that is what it was, because in each corner there was a symbol). 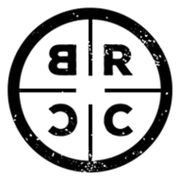 The symbol was similar to this, plus a coffee symbol

I couldn’t tell you what caught my attention, but they seemed uncertain of sitting near Wolsey and I so I kept watching. Eventually they sat one seat over behind Wolsey and were talking back and forth. They seemed a bit nervous, but the guy facing away from me seemed to forget I was there. I noticed along the back of his shirt it said Black Rifle Coffee Company.

Immediately I was sure the shirt was a dog whistle. Two white males, displaying a brand of coffee that loves its artwork about guns, on a day of alt-right violence. I had never heard of a BRCC coffee shop so I doubted it was a local coffee company and that they worked for them, and while I couldn’t be sure about the meaning of the company, I was sure it was an alt-right signal.

I noticed the guy kept watching me and Wolsey, and that brought my full stare at him, I didn’t look away even as I talked with Wolsey. Something about the guy bothered me, and while I didn’t say anything to him, I am fairly sure my staring at him caught him off guard. He kept half looking at us, but he wouldn’t meet my eyes.

I watched for a couple of minutes and then without looking away I reached over and lovingly patted Wolsey’s hand, in a gesture that established our relationship. The guy’s eyes shot up and he flinched a bit.

In my emotional state I was hoping he would say something. I was praying he said the “f” word even in passing. The last year and a half dealing with the passing of both parents was wound up pretty tight. However, they are both small to medium sized guys and I am pretty big and he said nothing. He just looked down.

By this time Wolsey noticed I was watching something and had a curious look. He knew I was bothered, but didn’t draw attention to it. He told me a little about the crash (we had just heard about the car attack) and I said loudly something about “Alt-Right Fucks” and the guy that still wouldn’t look at me directly flinched again.

I knew I was right about them at that moment. I was also slightly disappointed that evidently like the other alt-right people they were not willing to say something to someone on equal playing field.

It was then that Wolsey and I got up to leave. I think Wolsey knew the second he saw the guys what had my attention and why. As we walked out I wasn’t sure if they would say something, they douchebags had been super active all over the country so maybe these guys would say something.

I was hoping they would, but the one guy wouldn’t look at either of us, and I don’t think the second guy even knew what the situation was. He did seem taken aback as Wolsey and I walked out the door as I had hugged Wolsey as we walked away and was watching the two of them.

We did a quick google search after it about Black Rifle Coffee Company. They do supposedly hire veterans, and I am for that. However, they are based in Utah, they scream about the millennial attitudes, they are for retaking back what we originally where (a coded dog whistle), they are a coffee company that “makes coffee that conservatives can drink”. Their coffee cups even have weapons printed on them. They scream about immigrants and refugees, they were upset that Starbucks pledged to hire refugees and somehow made that an attack on veterans. There is more, but I don’t need to repeat all the shitty things they say.

Oh, I guess I do have to say one more thing, they support Donald Trump, if that isn’t a reason to call the company douchebags then I don’t know what is. Also a confirmation to me that wearing the shirt is a dog whistle.

Update: BRCC hiring veterans is not necessarily a “feel good” thing. There are definite advantages for tax credits and if you think BRCC doesn’t consider that as well then you aren’t thinking it through.

While Starbuck’s gets no tax credit for hiring refugees, BRCC is hiring veterans for PR and for tax bonus:

If you think for a second they are not doing it for a tax credit, I have a bridge to sell you.

This entry was posted in All Articles, Lucky's Articles (AG) and tagged alt-right, dog whistle, encounters. Bookmark the permalink.