This year marked the first year that I have ever gone to a pride parade. My friends, Lisa and Vince, brought us with them. Honestly, Lisa did the planning, and my husband and I arrived at their house at the appointed time. It was that forethought and planning that sent one of Lisa’s oldest friends there first as an advance scout to secure us a big site under a nice shady tree. Without Lisa, Vince, and their people, I would have never gone.

I have some baggage with the LGBT community, spanning back to the 1980s, when the prominent Seattle LG groups were still trying to argue that B and T should not be involved. I was from a smaller town up north, but got the newsletter. As a self identified bisexual kid, with gender issues, I was very aware who did and didn’t want me around.

One of my friends came back from a Seattle pride parade in the 80s. She’d been told, because she was openly bisexual, that she didn’t belong at pride. Her friend was a part of Dykes on Bikes, and found her crying, and had said fuck that bullshit. She had my friend on the back of her bike to actually be in the parade. My group of baby bi’s were also filled with baby leather dykes, so we really looked up to those women. They were one of the few lesbian groups that consistently accepted me, and my bisexual gal pals.

This, and many other issues from the 80s has led me to be consistently wary of large scale LGBT events.

It was with all this baggage that I went to my first pride event. When Dykes on Bikes blared through after the opening Batman roller blade guy (It’s a Seattle thing), I noticed they had transgender folks with them, and I felt this was a nice sign that we are all included. 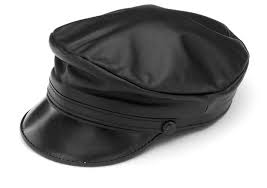 Nothing makes me feel safer than a lesbian in leather with a buzz cut.

In fact, I saw so many transgender folks, mixed in quietly amongst the crowd and the parade floats. I saw a good dozen transgender men, because I guess shirts off is what we do, pre surgery or post surgery. (How do you do the mental high five to other trans guys without outing them, or looking like a dorky fanboy?)

To see so many of us represented there, and welcomed with open arms . . . I just don’t have words for how huge it is to see that. It was deeply moving.

I also can’t remark enough on the people I went with. They made me feel not only safe, but that if something went down, they’d have my back. I’m old enough to remember being chased, punched, and screamed at for being queer. Safe is good, but having your back? That’s better.

One of my favorite highlights was listening to Lisa tell the kids in our group about the Stonewall riots, and how pride parades started. Watching these young girls learn about a history that is usually hidden or forgotten was pretty cool.

Not all of it was good, though.

The street preachers with big signs and megaphones were in force. They shouted through their megaphones that we should all repent, and that we were going to hell.

Orlando had just happened, and to see these straight white dude-bro’s with signs doing this at the pride parade was a low blow. When I caught sight of them, it was gut wrenching. Even more so because this was a pride parade, and how fucking dare they?!

When they threaded behind us, we all stood up and glared at them. I’m short, but I hear I can be a bit intimidating with the hate glares. My husband is 6’4”, and was flanked by Vince who was also huge. We ended up in this weird silent glare, and the guys with signs got visibly nervous. It was a substantially large group, along with the people on either side of us silently glaring at them. It didn’t stop them from coming back. Probably, in hindsight, because we had made a point out of the whole thing.

They set up shop right behind us. This meant I saw the folks in the parade as their eyes hit the signs. I saw float after float go from smiling to grim. Some were angry, some were obviously pained by these people.

I liked the one young gal that was marching with her church group that broke away to tell the crowd that those guys were assholes, and had nothing to do with god. I appreciated her anger because I was so angry at these assholes for hurting so many people.

Then, a hero emerged. The sign assholes backup up to a balcony, and a young man who looked very red and black, if you know what I mean, grabbed the sign and yanked up up and away, never to be seen again.

The crowd went crazy with the applause and screaming, and the kid just sat back down to vape as cool as could be.

It might have been a spur of the moment reaction, but the kid derailed the asshole sign marchers. They lost their megaphone might, and spent literally the next six hours arguing with cops quietly about the loss of the sign. They were effectively neutralized to our small area.

At one point one of the hate organizers ran to the cops in cop cars that were a part of the parade to say his hate sign was stolen. The driver listened for a few minutes, then looked over at the rest of the hate brigade, then sat back in the drivers seat, and held up his rainbow hand sign, and keep driving along the parade route.

The cops in general were obviously unhappy with these assholes, and that might be why the cop that went up to that balcony came back and shrugged that there was no sign of any lost hate signs.

My husband and some of our group had further altercations with these assholes throughout the parade, and I was very glad of the people I was with. I felt they had my back. Lisa and Vince, and the people they hang with created an aggressively safe space, that not only included our group, but all the people around us. You couldn’t find better people to hang with.

Our group was loud, and cheered for everyone going by. We were at the end of the parade route, and to see the parade participants perk up, and look happily at our group was worth my lost voice later.

It wasn’t that long ago, that marching in a pride parade was tantamount to career suicide, so I appreciated the hell out of every person that made that parade happen.

Since it’s 2016, I think it’s time I let go of some of that baggage I’ve been carrying from the 1980s. I’m not sure I will ever stop feeling astounded by the acceptance I encounter, but maybe I can stop flinching quite so much. 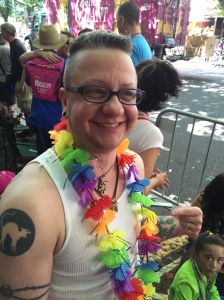 Thank you to the nice young gal who ran across the parade to give me this.

I am a middle aged man. I am an author and a maker.
View all posts by Wolsey →
This entry was posted in All Articles, Jello's Articles and tagged acceptance, discrimination, events, intolerance, jello, pride. Bookmark the permalink.