Posted on July 1, 2015 by AccidentallyGay 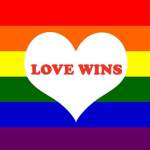 It happened folks, Jello and I are now legally married no matter what state we are in. Ok, there are a few places that are still fighting it, but after clerks are sued into the ground that will end quick enough.

To be honest I had always hoped for this day. I always believed you should marry who you want. However, I will be honest about it, it was in a more “theory” sort of thinking. After all, up until a couple years ago I was in a heterosexual marriage and while I have had some attraction to guys I just never pictured leaving Jello.

Things changed of course (and this blog was born) and I am incredibly happy. So when I first heard the words of the Supreme Court I was happy, but my initial reaction seemed a lot more subdued then I would have thought (and more subdued then I saw from most non-traditional relationships).

I found I had to sit down at work after a couple of hours and I couldn’t breath. I couldn’t figure out what was bothering me until I realized it was the first real time I noticed how much I had really been bothered by the fact that in 14 states my marriage wasn’t recognized (several of them are states I will have to travel to often for my agency). I was shaking a little and it sounded like I was in a metal drum.

It passed soon enough and I was elated. Of course I can’t scream at work about it but I am sure my coworkers noticed my infinite increase in mood (especially since I normally hate that job). I was incredibly happy, and for the first time I understood what my queer friends felt like when marriage was passed in WA state. At the time Jello and I were in a Cis/Straight (well not really) relationship, so I was happy but not as exuberant as I should have been.

I didn’t realize how much it had bothered me, that when I go to Atlanta or any one of the other shitholes in the South and South West, that if something happened Jello would not necessarily get access to me since we are a same sex marriage now. I know it is a little thing to a lot of cishet relationships, but the realization that legally they couldn’t stop Jello from being there as my husband no matter what state my job sent me to was overwhelming.

I will be honest, still processing it and I probably will talk about it. However, I felt I hadn’t mentioned anything about it since the decision and I just wanted to shout out how great it is for everyone.

Now it’s back to flame wars on the internet, not only over the use of the racist Confederate Battle Flag, but now over the morons screaming that the Supreme Court didn’t have the right.

This entry was posted in All Articles, Lucky's Articles (AG) and tagged about me, anxiety, events, ftm marriage, marriage, Media Coverage, transition, work. Bookmark the permalink.